They only have 135 stores around the world but Kiehl's is an an iconic New York store that has been around since 1851. Each store as motorbike in it and Winnipeg is no different. The bike in the 1000 foot second floor location has a 1969 Harley-Davidson Electra Glide. The store is now a division of L'Oreal.

The store describes itself as an "old apothecary" concept.

Polo Park continues to pursue exclusive retailers to its location. Any local retailers would fare far better in the regional malls or at street level than hope to get into the mall now. In fact, many Canadian retailers will have to look over their shoulders in the next months.
Posted by John Dobbin at 9:30 PM 2 comments: 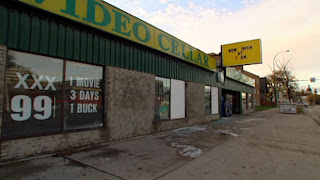 The aftermath of the closure of Blockbuster has been rather swift moving in Winnipeg. Most of the old locations have been grabbed by other retailers, restaurant operators and service industries. This is in stark comparison to the sad state of affairs in the States where so many Blockbusters stand empty.

Snap Fitness has been grabbing up many of the old locations. In the Charleswood Shopping Centre Plaza, Pet Valu has grabbed up the old Blockbuster location leaving their smaller spot in the mall. I think it will fill fast.

Farther up in the north part of the city, one of the Blockbusters is becoming Famous Dave's.

Still, within one year, it is likely every empty Blockbuster will have found a new tenant.

But what of video stores in general? Has online crushed the bricks and mortar store?

Well, not quite. Simply put, Netflix does not carry everything and often lacks new stuff. The price maybe good for the service but you still need high speed Internet and delivery devices such as computer, cell phone, tablet or TV.

Netflix has come a long way but the truth is that some areas may never have fast reliable high speed Internet to receive high definition signals.

As for cable and satellite: Their selection of stuff on Video on Demand is limited, the price is high and the means to select what you want to watch is not the best.

So, what has the closure of Blockbuster really meant? Well, according to the Free Press, it has meant additional business for existing video stores. In short, local business has benefited the most.

In essence, it is Back to the Future for the rental business. Prior to the Rogers, Jumbos and Blockbusters, the video rental market was very local. For years, I used to get my videos at Video Zone on Academy Road.

There was a shakeout later in the 1980s and most of the smaller shops closed up shop.

Now the shakeout is the bigger shops.

What has happened is that the over capacity in the market has been removed.

While Netflix and other downloads are having a huge impact, the DVD market is still viable. The very cheap DVDs in Safeway are still not as plentiful or diverse as a well stocked store.

It is doubtful that a major industry player would look to do what Blockbuster did and have a national chain of stores. The margins are too low.

However, until highspeed downloading arrives everywhere and the price and selection are there, most people will not toss their DVD players out.

One suggestion to local business out there. Charleswood and Tuxedo need both a hotel, a video store and if we are to believe some seniors, A Sal's.
Posted by John Dobbin at 10:14 PM 7 comments:

I guested on the brilliant program Winnipeg Internet Pundits on Wednesday at 5 on UMFM.

Tessa had provided a very detailed program plan which I apologize for going rambling past. Listening to the program, I think my stuttering is cringeworthy. Thanks to Christian, James and Walter tried keep thing on course and I thank them for that. Note to self: Bring something in writing yourself so you can not just talk off the top of your head.

The topics covered included the future development of Polo Park and surrounding area. I expressed confusion as to how the Asian food grocery was lost and how Western Financial suddenly became part of a mixed use mall.

We talked about retailer we might like or expect to see. First off, I should say I have no problem with local retailers and will seek them out whenever possible but I will say right up front that Polo Park and St. Vital Shopping Centre are poor prospects for a purely local retailer.

We talked about the little music area on Portage near Advance Electronics. I don't know that anyone has ever mentioned how many local music stores call that area home. There is Yamaha and Encore along with a few others.

The Free Press has written about how many wedding dress shops are along Portage near The Bay. What hasn't been mentioned is how many optical places are there too.

Touching upon The Bay downtown, there was a discussion of how the restaurant Oliver and Bonacini was going to be a destination location.

Downtown will only draw people with something exclusive like Mountain Equipment Co-Op or Birks. The old Bay restaurant certainly wasn't going to draw pre-Jets games crowds. Oliver and Bonacini will.

As far as the old stadium site, I expressed doubts about Lowe's locating there but thought Kohl's might be the right store. Truth of the matter though, nothing will be set in stone until the stadium is knocked down.

And many big retailers might be looking at the Seasons of Tuxedo to see how things shake out there before committing to an undefined stadium site.

I criticized the province about squatting on parking lots when they could have out the space on offer as both a parkade and office or residential and help create more energy and density around the Winnipeg Convention Centre.

I hope I didn't sound too negative about things because generally speaking I see positive things happening.

We are still finding our way on things but discussions of where we live, work, shop and play have to be in the forefront of any discussion we have on the city.

Thanks to all on the show who help try identify the city's strengths and where there needs to be improvements. And I will try not to ramble on as I did if I am ever back. I was nervous.
Posted by John Dobbin at 7:11 PM 1 comment:

The Wonderful Thing About Tiggers (Sing Along Songs)

Seemed a good time to be happy after such a sunny Wednesday.
Posted by John Dobbin at 11:41 PM 1 comment: