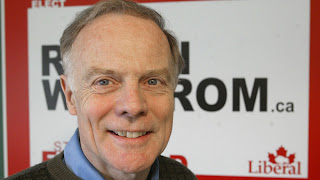 Both have mused in the past about merging the NDP and the Liberals and seem to be hurrying along that process.

It has to be a bitter pill for Gerrard who has presented a good platform, has recruited some excellent candidates and received some credit in the press for trying to show some alternatives.

I have stated I don't believe in the two party option of simple left and right choices.

Jon Gerrard has one thing correct and that is the NDP performance in health is underwhelming and the worst place you can end up having happen to you is to end up in the emergency room. While the NDP clams they have reduced wait times, they don't include waiting to be discharged out of the ambulance.

The thinking behind Neville seems to be "anyone but the conservatives." Sadly, that attitude wasn't held by the NDP who gunned hard for her and the result was...a Conservative.

We need a third or more choices in our Legislature. Some Liberals seems to want to end their party by undermining support for the party. It would appear some Liberals are moving right and some left.

Doesn't leave room for us centrists.
Posted by John Dobbin at 6:30 PM

What was the point of the Harvard/Neville letter other than to land a shot on Gerrard? With all due respect to the Liberal candidate there, Seine River is a two-way race. There is no way that the meager Liberal vote there will determine the outcome of the vote. So the endorsement is really irrelevant apart from the fact that it undermines Jon Gerrard's leadership. That was a very peculiar decision by Harvard and Neville.

Yeah, poor Jon. I like the man. I think he's in politics for all of the right reasons.

There's just not room for another centrist party. Unless one of the three decide to head to the fringes no matter how good a platform or decent slate of candidates he comes up with there's just not enough oxygen in the middle.

I agree that the letter was odd. I wonder if they'll offer to be part of the solution in working hard to find a new leader and building a party platform for next campaign ? Probably not.

I too echo OMC's & Mr. Christian's comments regarding the "peculiar decision" of Neville & Harvard to issue the letter. Gerrard's a decent man and didn't deserve this on the eve of the vote. Moreover, it speaks to a belief I have held for some time, namely: Manitoba Liberals at all levels too often engage in strange shortsighted pettiness that only damages their brand in the long run.

If Neville & Harvard wanted to influence future of the MB Lib party, the time to do it would be after the election not now.

OMC: The Liberal candidate in Seine River is not a resident. He is trying hard but, as you said, is running behind the the two main parties. I am left shaking my head what the rational is in endorsing Oswald. Neville said it was for her as a person but as Nicole Turmel has found out, this can look like an endorsement of a party as well.

MrC. There is certainly room for a centrist party if the ideas differ from the others straddling the center to win elections. As we saw from 1981-1986, when the two main Manitoba parties were only the ones in place, they tended to think that they could veer left and right dramatically and no one would think they had another choice.

FA: No matter the outcome of this election, Gerrard was likely to contemplate his future. It is obvious some Liberals decided to push the idea that the NDP and Liberals whould be united.

It is sad and shabby treatment in the middle of an election.