Polo Park continues to get ready for Christmas. Skechers is now open and Forever 21 and BCBG MAX ARIA are building. Now word comes that a young favourite Hollister is going to open in the mall.

Hollister moves into the recently vacated Addition-Elle store. The retreat of Addition-Elle should come as no surprise. They are following Tommy Hilfiger out to Kenaston. No sense having two stores so close together.

Hollister only has seven locations in Canada so far. This should prove a major attraction for people outside Winnipeg to come to the city to pick up clothes not easily found elsewhere in the province.

Overall, Hollister has only been around for 10 years world-wide but it has swept the U.S. coast to coast with bright T-shirts and hoodies. Their exterior storefronts are intriguing and the inside has various rooms. One outstanding feature is a wall bank of TVs that features two views on either side of the pier at Huntington Beach. It is live footage of surfers. Cool.

Hollister usually like to place side by side with its older sibling of Abercrombie and Fitch. However, space at Polo Park in nearly filled save for the huge empty spot of McNally Robinson at 20,000 square feet.

The other exciting news in terms of Polo Park is what is happening just north of the mall. Work is well under way for Corus Entertainment's radio stations. CJOB, Power 97 and Groove 99 are moving soon from Portage Avenue. However, the radio stations occupy only a small portion of the nearly 200,000 square feet of space being developed. Word has it that the anchor store to the development is T and T Supermarket, a Vancouver-based Loblaw's owned Asian food grocer. 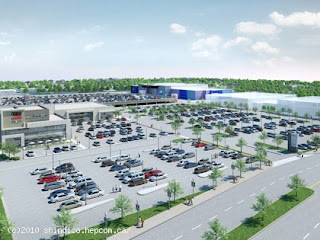 Illustration of the new development.

T and T is planning a 45,000 square foot store which dwarfs the recently opened Lucky Supermarket which opened on Winnipeg Avenue earlier this year with 20,000 feet of retail space. Sun Wah Supermarket on King Street is only about 13,000 square feet.

The CBC said some Asian retailers are fearful of the competition whereas some people said that the store will appeal to a variety of customers of non-Asian descent who are looking for produce and products.

The store will be a great addition.

However, I can't be the only one thinking that issues of traffic in the area are only going to get more complicated. 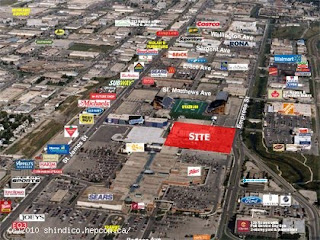