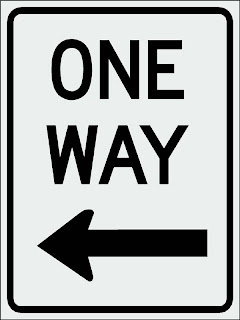 Winnipeg went the one way route in 1956. The downtown is now almost entirely one way streets now. From a traffic engineering perspective, the decision to this was based on speed and efficiently. I think we can say "mission accomplished."

However, the result seems to have been a mass exodus from the downtown. Speed of getting in and getting out has been the major consideration but never was the idea of vitality considered.

It is an idea worth considering. A few cities are beginning to reverse some of there one way streets to two way. The initial results are encouraging.

Vancouver, Washington according to businesses on their Main Street said the turnaround even in a recession was almost instantaneous. Minneapolis is now experimenting with the change on Hennepin Avenue and 1st Avenue. It remains to be seen if the same success occurs for the streets there as it did in Vancouver but the trend to making the change should be able to give a good indication about the benefits and detriments.

There has been talk about two way streets in Winnipeg but never seriously debated in council. It is likely to be a few years before it even registers.

I expect we will have to fight city planners all the way on making changes. Joseph Dumas, a professor at the University of Tennessee, argued a few years ago that...

...the primary purpose of roads is to move traffic efficiently and safely, not to encourage or discourage business or rebuild parts of town . . . . Streets are tools for traffic engineering.

That sort of thinking leads to empty downtowns.

I cannot agree more, Winnipeg's one-way streets were designed to get cars through the downtown as fast as possible, and in the case of Donald, and Smith Street, I can understand. But, why does Edmonton, or Kennedy, or even Fort and Garry have to be one way?

I'm in Minneapolis and Hennepin and First Avenue becoming two-way doesn't do anything for downtown traffic but cause it to be more of a nightmare. People aren't going to slow down and stop unless they planned on doing so anyway. Plus, with the Twins stadium, rush hour is an adventure. Good luck to Winnipeg though. I really do mean that. I haven't been there since I was in high school over 15 years ago, so I'm not sure what your traffic situation is.