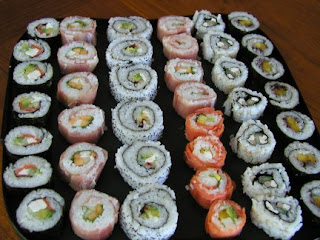 I mentioned a while back that Charleswood has had an influx of Japanese restaurants in the last year and a bit with Sushi Park and Asahi.

River Heights has been going the same way the last years. I noticed this week that a small sushi restaurant named Kudara is opening in the former cat and dog pet supply store It's Raining Cats and Dogs On Academy Road. The pet store has moved closer to the St. James bridge on Academy. Right next door is a spay and neuter clinic which has been at their location for a few years now.

Kudara joins California Sushi and Asoyama Sushi which are between Lanark and Beaverbrook Street.

Is it too much to ask for some Indian restaurants now?

By the way, Lux for Sprouts, a kids store moved from its Academy Road location to the new building built on the Anglican church site at Lanark and Corydon.

I saw the sushi restaurants in both locations downtown.

In my opinion, most of the empty storefronts around the MTS Centre could easily be successful serving the very busy arena by becoming restaurants.

Can't tell you how many times I have gone to a game or an event only to be find several of the nearby restaurants filled to the rafters.