I have been pondering the question about the new stadium plans for Winnipeg. The latest twist in all this is David Asper's plan.

I think the first thing is for there to be honesty in the debate about a stadium. In the past, we have seen a lot of dishonesty in regards to sports and entertainment facilities. The MTS battle comes to mind. I changed my vote with Glen Murray based on what I thought was dishonesty regarding funding for the new arena.

I supported a downtown arena as a worthwhile replacement for the Eaton's building. Unlike some of the dreamers out there, I saw no viable private tenant who would take it over. I also didn't think much of the condo and commercial plans that some people proposed that would have gutted the building and required even more tri-government support than an arena required.

Picture of the old Eaton's building. Picture taken by skinlovr 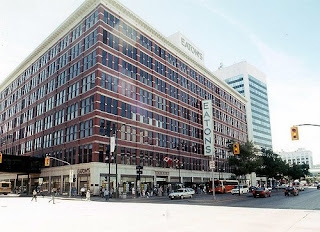 It seems that when it comes to public facilities, the first casualty is complete openness in the process.

Apparently, the Blue Bombers wished to stay in their present Polo Park location. However, if they want a new facility, they are at the mercy of politicians and business people who have their own agendas.

The stadium site at Polo Park has become a valuable piece of land in the ever expanding retail sector. In some ways, the stadium has become more of an inconvenience than a draw in terms of retail.

Vic Toews, the Harper minister in charge of Manitoba affairs indicated early on that he was not going to be able to sell a deal to help build a new stadium at the present location to the cabinet.

For political reasons, eyes started to cast about towards the downtown.

Almost as an afterthought, Asper's Creswin real estate company added a stadium to a waterpark proposal that it was thinking about selling the city on. Once that stadium was tossed into the mix, excitement at various levels of government jumped immediately.

One problem: No one had asked Point Douglas residents what they thought...